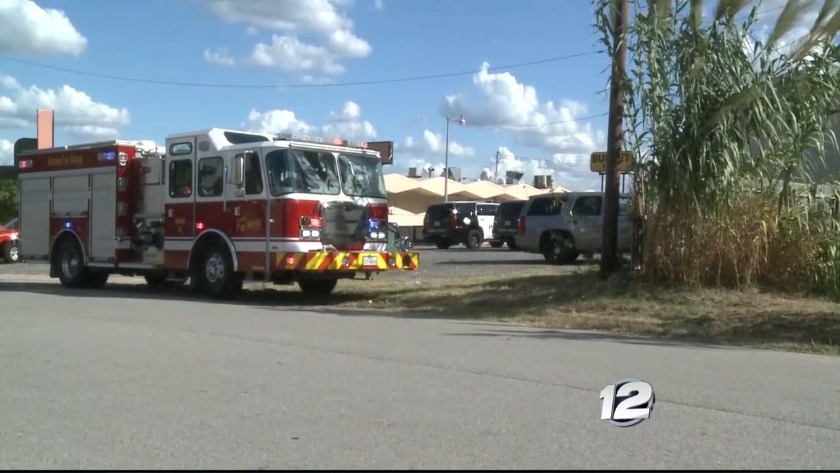 DENISON, Tex. (KXII) - A man is out of the hospital after getting shot in the head Tuesday afternoon in Denison.

Denison police are searching for two suspects after a man was shot in the head Tuesday.

Police are still looking for two people who fled the scene.

But that all changed Tuesday.

Police said a man was shot in the head right outside a breezeway near South Austin Avenue after 4 p.m.

"I came home and I just seen a bunch of cop cars and walked around, and I was a little curious at what had happened," Rivers said.

Denison Police Lt. Mike Eppler says they responded to a call at the Budget Inn that a man had been shot.

"And we found that it did not actually occur at the Budget Inn, it occurred across the street at the Circle Apartments," Eppler said.

News 12 spoke with the man who was shot. He didn't want to explain any details of how he ended up across the street at the apartments.

But he did tell us he saw a car pull up, a .38 caliber handgun was pointed at him and next thing he knew, he was bleeding from the head.

The man also told us he just checked into the Budget Inn Tuesday morning.

He didn't want his name or face on camera for fear of his safety, but he showed us where it hit and you could see where the bullet grazed his scalp.

Lt. Eppler said they are searching for a red four-door car with a white fender. He said they do not have a description of the suspect.

The man who was shot said he was trying to get his life together, but wouldn't say what exactly happened.

Police said they don't believe there is danger to the public.

"Just had a newborn kid, so it does make me really nervous being right here and around all this," Rivers said.

Anyone with information is asked to call the Denison Police Department.

The property manager for Circle Apartments said she'll be asking for more security to patrol the area.

Man charged with murder for father's death in Choctaw County

Man charged with killing 4 Durant teens back in Bryan County

Grayson County sees spike in unemployment due to COVID-19

Man charged with murder for father's death in Choctaw County

Man charged with killing 4 Durant teens back in Bryan County